What I did for two days last Week


Tweet Meerut is considered as a Sports City by many as different types of Sport goods are made here. In Fact many Indian and Foreign Cricketers play with Bats that are Made in Meerut . You must have seen Stickers on Bats with SS,SG and BDM written on them , all these Bats are Made in Meerut. Also there are various Sports stadium here and one of them is very close to our Office. So one fine day after Office me and two internship trainees Prashanth and Sheeraz went there to have a look at it. 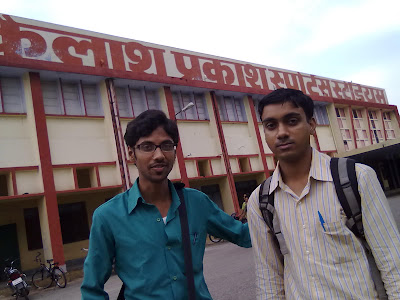 Sheeraz and Me Outside Stadium

The Stadium name is Kailash Prakash Sports Stadium. I have once more gone there and they say that even once Gavaskar played here a Cricket match, my Uncle has seen Mohd. Kaif playing here for U.P. in the Ranji Trophy match at this Stadium. As you enter the Stadium premises the first thing that greets you is many young Guys and Girls who come here to learn various sports, but the Stadium looks old and is not very well maintained.I could see  Athletes preparing here some for Long Jump some for Running and some  trying to Kick at a Cushioned pad thats been worne by a Guy who happens to be their trainer also. On one end Some Kids were playing Hockey on Grass field while Modern playing standard for Hockey require Astro Turf, but you could see enthusiasm in everyone no matter what kind of facility they are provided with. 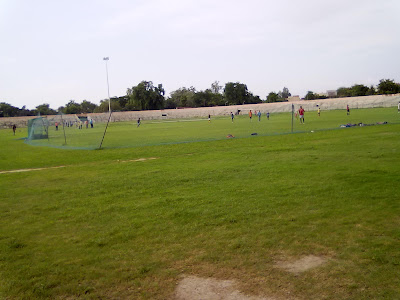 There is one more Stadium here in Meerut which i found well maintained as now a days Ranji Trophy matches are played there, i had seen few matches also there and some players which i had got chance to see are Suresh Raina,Mohd. Kaif,Praveen Kumar, Piyush Chawla, Sudeep Tyagi and some more which are not much relevant now, last year Rahul Dravid also came here who played for Karnataka. 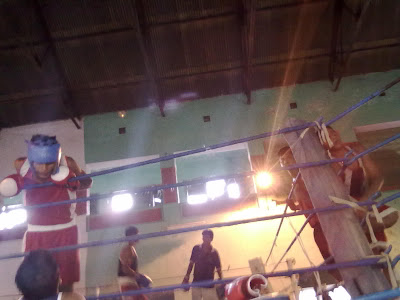 We just stayed there for few minutes and came out of the ground , in the outer complex of Stadium there is one Olympic Size Swimming Pool where when i once went saw Fatty Children of some Rich family enjoying their time being in Water , swimming was not in their minds. In one dark big hall there is a Boxing Ring where many Boxers were practicing, that hall was so dark and so humid even for us to stand their for some time was difficult God nows how they practice there and if still we won an Olympic Medal in Boxing that is highly Commendable. Outside you have one Basketball Court and an Indoor Badminton Stadium. 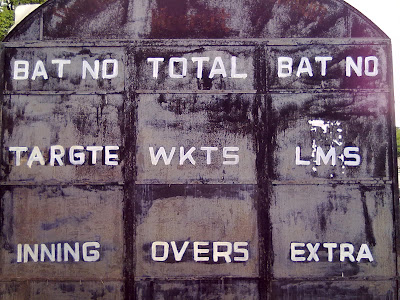 This Scoreboard amazed me see the Spelling of Target


After that we came out of the Stadium and we were feeling hungry and we got to see a Thela on which Chow Mien were being prepared. As it was an Egg Chow Mien Thela i was reluctant to eat there as i don't eat Eggs but the Chef(can i call him ?) there said he has separate utensil for making Egg less Chow Mien so i was ready to eat. For me to eat something is delite but the thing that fascinates me more is to see it being prepared in front of me. I was served first and Prashanth and sheeraz later as they opted for Egg Chow Mien.Take my words it was one of the Best Chow Mien i have eaten, my mouth is full of water at present. When we finished eating one person came to take Half Plate Chow Mien with five Eggs in it, thats lots of Eggs as Compared to Prashanths and Sheerazs Half Plate which was made with only One Egg. 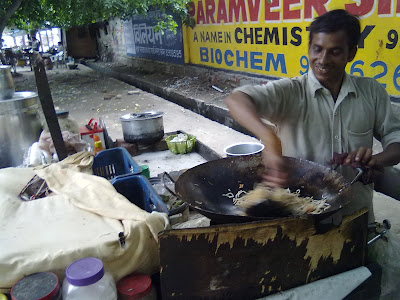 See The Face of Thela Wala glow with Confidence

After eating road side Chow Mien we decided to have Pizza at Dominos the next day. The reason for opting to go there was as no body amongst has eaten Pizza at these Branded Venues. So after Office we went there and with some difficulty in searching Dominos store we were finally able to locate it. As we entered we could see no body was present there which was a surprise, then for selection of the Pizza we were handed over a template which was showing various Pizzas, we opted for Fresh Country Veg Pizza(It looked the Best) which was written to be of 95 INR exclusive of VAT hence with VAT it costed 107 INR the attender told us to wait for 15 minutes for our order, we were shocked with this as they have this slogan 30 minutes or free and we were being told to wait for 15 minutes at the Dominos store only, can't understand this stuff from them. As we were waiting A guy and two girls also came but they were busy talking with each other and i thought they had no plan to eat here just came here for some peace, the Guy was clicking the Picture of one of the Girl( collecting some memoir ). At last our Pizza came and our first reaction was " Its very Small ! " nevermind
we must taste it now and second reaction after tasting it  was " Its not what we had thought it would be ! " all in all it was not a good experience for us and i planned from now onwards i will not waste my time and Money for Dominos Pizza as its service and the product could not lived to our expectation. 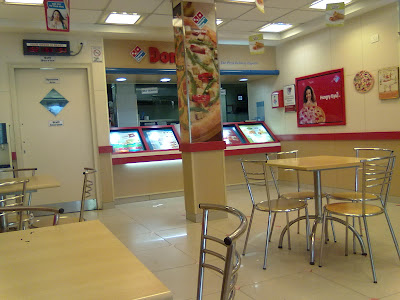 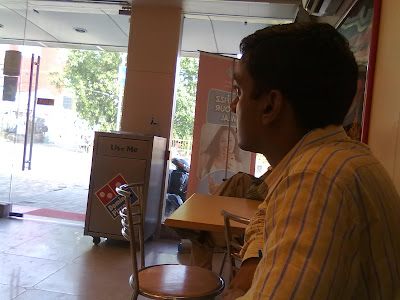 Its me Waiting For Pizza 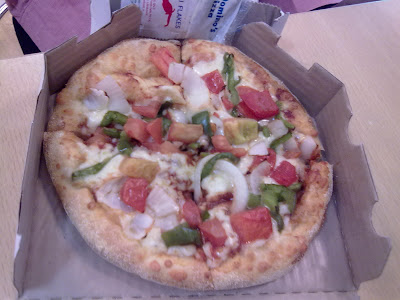 At Last Our Country Fresh Pizza
P.S. - All the Pics were clicked by Prashanth by the NOKIA Phone that he bought from his Cousin.