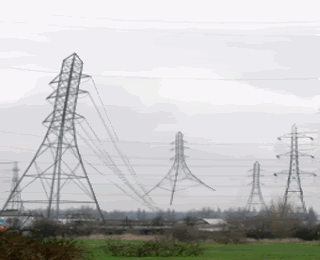 As the Summer season is on the havoc the electricity crisis is increasing day by day.While this may be not true for Metros(Where Govt. has to provide power) but the condition other than those is not so great, specially in northern India.
Where i live(Meerut) the condition of electricity is worsening. Whats the reason behind it ? There could be many, Not much Power Generation,Population bombardment,Electricity theft,Electricity Wasting.
These and some reasons which has resulted for this condition.
I tell you how much electricity we get on daily basis(Population of Meerut district is more than 1mn)Electricity leaves us sharply at 10 am and comes back at 2pm(but not sharply as it goes) then scheduled cut is at 1 am  to 4am but believe me in between 2pm and 1am they can cut for any interval of time(As when i am writing this post it is 4pm and there is no power)
Same problem our neighbouring country Pakistan is facing but if you go through there sites this problem is highlighted persistently. But here in India everybody knows that this problem is going on , but as Mediamanics are living in there Powerbackuped AC rooms this situation does not get any recognition.
Sameways if we could switch off Electricity for one hour daily at prime time imagine how much electricity we can save. Where i am living most of the people are having ACs(the big power consuming machines) ya we also have one, but most of them have more than one at there home which keep them cool all day long(and yes they proudly claim that they are the owner of that drastic Power eating machine).
Another problem is theft, as i am living in the society i see whats happening inside it. I know many people who are using different ways to slow down their Electric meters. I am sure people around you must be indulged in same thing.
If  we are irresponsible then we are bound to be in the situation that we are today. Firstly we have to make a change within then we will see the difference ! Tweet

When I Used To Have Moustache 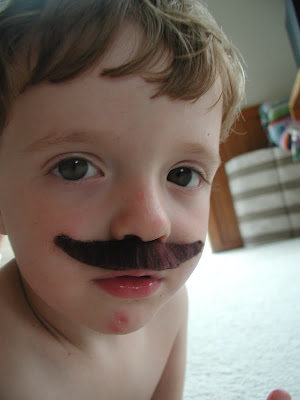 Moustaches are sign of Manhood for many men, but for a child its a  nightmare. Thats what happened with me. My Father got transferred from Delhi to Betul( A District in Southern Madhya Pradesh) as he is a Govt. employee when i completed 6th Grade. So our whole family comprising my Parents and my elder Sis had and me shifted to Betul. Life was going fine in Betul as we had completely new place to live,with new friends,new School and new places to roam around.
As time passed and i was studying in 7th Grade some hair started emerging above my upper lips. Firstly i didn't noticed them but when my friends started making fun of me then i noticed it seriously. Suddenly they started growing bigger.
One day i went to my Friends home on my Bicycle,when i was about to return a child shouted to his friends " Muchhi wala Ladka"(In MP they used to call Muchhi as we call it here Muche) and they started making fun of me and were watching me as if they had seen some Alien. Disgusted i returned to my home.
My parents new about my Moustache but didn't cared about it, they thought its normal. When i used to go for Tuition's somebody from back row will shout " O Muchhad " or they will silently discuss about my Moustache, this made me sick. And hey there used to be many girls also who used to be in my tuition,what they must have thought about me ?
As i am from Western Uttar Pradesh we used to visit our relatives there every six months. Then same thing pertained there also, all my cousins made my fun, Even every relative used to comment on it.
This made me an introvert at that time and i stopped going outside. Then one day an Idea came to me. Why not just temper my Moustaches little bit. I went for Bath with Scissor and in front of Mirror i trimmed my Moustache. Out came I from Bathroom and my Parents glanced at me with a different look. My father started laughing and my mother gave me an Whack(I mean slap) I was caught offgaurd. How could u cut ur Moustache ? But i said  no i haven't done anything(how stupid i was,clearly my trimmed Moustache was visible)
But till now i couldn't understand why she slapped me that time(Don't u think that she is a rude mother, in fact she loves me more than anyone). But my plan failed. Time went by and i became more and more dumb guy,very shy, i could not face anybody. That period of my life was horrible for me.
My Best friend of that time still call me Muchhad whenever he calls me(Hey now i am an engineer and working, this story is around 10 years back)
Now i passed my Twelfth Grade and still i was having this Moustache. As i was grown up at that time i planned to get it off. So one day i went to Barber Shop(haan Nai ki dukan yaar) and said to him to shave it off. When i opened my eyes i could not recognise myself, i knew still hard times are ahead. Went to my home(this time everybody knew that i had gone for shaving my Moustache) and again everybody made my fun. When i went outside same thing happened again my friends laughed at me for looking very different. It took some time for normalcy.

Now 7 years have passed and i don't have a Moustache each day i have gained confidence and from an introvert i am in phase of becoming an extrovert. Tweet


Tweet
I know no body is reading my blog and why will they if i don't put something in it and do not publicise it, so now i wanted to write some post. I was thinking what should i write but my dumb mind didn't give any hint. Therefore i will tell you about my Favourite blogs.
The first one is Ghumakkar 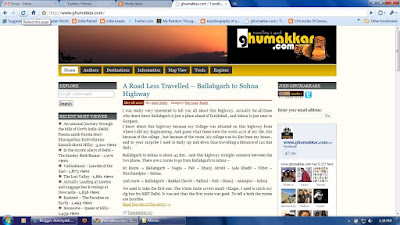 This is my fav Travel Blog. It is daily updated(well most of the time) and contains detailed travel stories by Ghumakkars. The stories are from all over the world. If you are planning for Vacation just go through it and search your travel destination you will get to know most thing about it. The Pictures are amazing there and beautiful narration along with them. So follow it and be a Ghumakkar.
The next one is Qasba 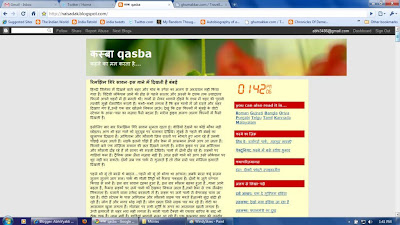 This is the best Hindi blog i have seen. From NDTV reporter Raveesh. Whats happening in and around Delhi(Mostly!) is narrated in beautiful satire. Most stories that he covers are roadside stories.
Autobiography of an Ordinary Man 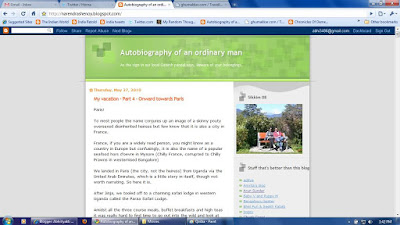 One of the best personal blog that i have encountered with. This blog is very humorous. This poor man always live under fear of his Missus(this is how he pronounce his Mrs). It is must recommended from my side.
Final Transit 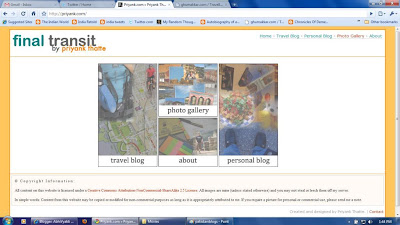 Final Transit is a personal blog of Priyank Thatte an Indian living in Canada. This guy is hugely talented. Under is travelogue he has covered beautiful places like BBhutan,Peru,Russia,Israel and some more places. If you go through is travelogue you will just struck to it and will complete in a single go(like me).Pictures that he took are awesome but best part is his narration.
Pakistani Blogs 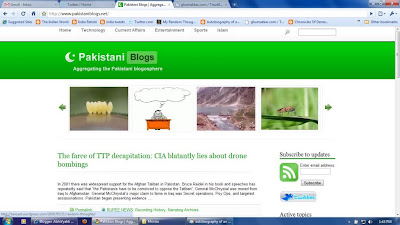 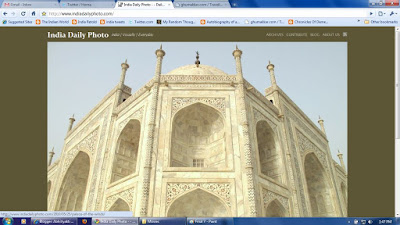 This is a Photo Blog. Daily one picture is uploaded. The picture is centered about India. They are of high quality. With it small description about  the picture is also given.
The Indian World 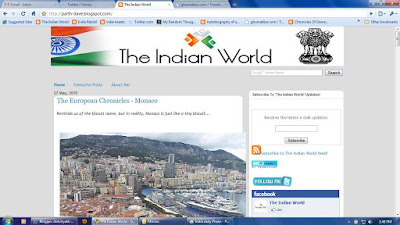 This blog is written by a small guy(By small i mean age not Stature) Parth J Dave. Though small in age this guy write big things. Looks like he boasts of becoming a big blogger. He had just completed his Europe trip, do catch it on his blog.
There are some other blog too that i follow but i will not reveal them now because if my dumb mind do not give any hint about my new post then i have to post them.
Tweet 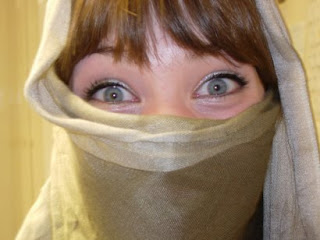 As my Office is some distance from my home i was coming back to my home by new Low Floor City Buses run by Uttar Pradesh State Road Transport Corporation in my City Meerut. As i was travelling and my adjacent seat was still empty i was hoping this Vacant seat must be filled up by some good looking girl. Much to my surprise a Young girl(must be around 19,20 years) in Burkha stepped in with some 14,15 years aged girls, while her face was completely visble she uttered " Hai Allah Kitni garmi h ". I was hoping she would sit with me but she sat few seats back to me. Everybody was having an eye on her. As she was behind me and i wanted to have a look at her i just turned my neck backwards as if i was stretching my tired neck, what i saw completely surprised me. first of all She removed her scarf and then top part of her Burkha and behind that was a Green Tshirt and last rites were soon done as she removed lower part of her Burkha and now she was a modern girl with Jeans and top. As half of the passengers were rural persons they all were amazed by what they had just seen. And now comes out her Cell Phone and calling someone " Kaha Ho Aap, haan m aa rhi hun ". Conductor came to her for Tickets She was going to a local Mall(We now know to meet whom). They both chatted for long time(Aree.. Conductor and the Girl,Off course conductor was having the time of his life). Surely the girl was very Gutsy as each and every eye in the Bus was on her and she was having no effect of that, Just like Kareena Kapoor of Jab We Met(Khud ki Favourite). Soon came my stop and i have to Step out of the Bus and she went with it...
Tweet