Tweet This post is for all those people who are on Micro blogging site #twitter , well most of you must be on Twitter. Twitter is the one place where you get knowledge about the whole world and it also gives you the chance to know about your favourite Celebs.


Yes ShahRukh Khan is there, Big B is also showering his tweets and so does the God[arey Sachin Tendulkar], but one guy was missing in the list , you all know him , he is a multi millionaire [thats what he proclaims ] he is smart , cool , hearthrobe of every girl , tall , Macho........... yes you got it right i am talking about our very own KRK [Kamaal R Khan]. If you knew only 3 Khans ShahRukh,Amir and Salman please add him as the 4th Khan in ur list.


I was waiting for him to come on Twitter and finally he is here . If your day has not got well, you are down and out , what will you do to overcome it ? I tell you just go through his tweets. Well who will not feel better after reading some insane thoughts , thats what he plates in front of you.


This person who is one film Old in Bollywood thinks himself as the best thing that happened to Bollywood after Amitabh Bachchan . Yes you had seen him on Big Boss Season 3 where he claimed that he owns a Villa in Dubai and his Milk comes from Holland, Water from France and Tea from London.


When you read his tweets you'll get to know why stupidity is at its maximum when he start tweeting. Man this guy has blocked 19,000 people on twitter , well you need to press the Block button 19,000 times for that and more on that 19,000 abuses must have thrown upon him, i don't know its true or not but if he really has blocked that much people he surely is insane. Below is the tweet where he claims to have blocked 19,000 people.

Other day i was reading the Wikipedia page on him i get to know that Mr. KRK and i share the same Birthplace a small town Deoband situated in Wetern U.P , what do i say for that ??? i better remain quiet. He is one of those few rare guys who has the ability to act, direct,produce and write a movie..... now you know why he is a class material.
Now on the other day he got into a twitter fight with very own Javed Akhtar here are some intercepts of that tweet fight. 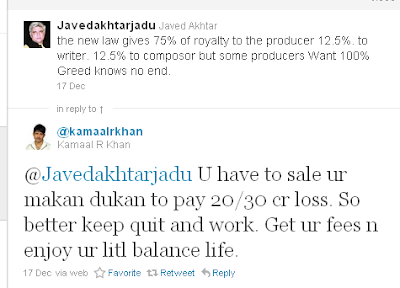 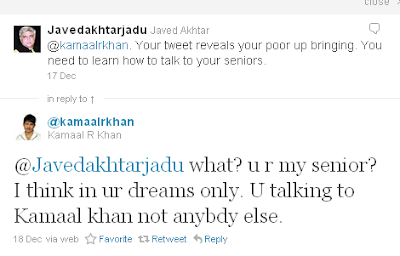 then KRK started abusing Javed Akhtar after he got a reply from him which challenged his poor upbringing. 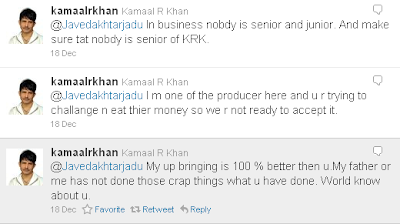 After some tweeples asked him that why are you fighting with Javed Akhtar a Pro man in Bollywood he told them to be shut up and don't interfere in our family matter[ Does he even belong to Bollywood family for one bit ????] 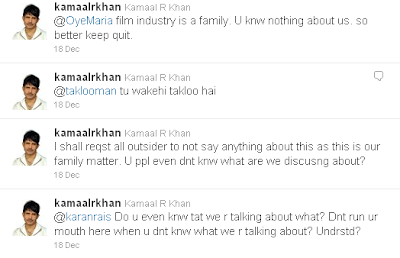 See here his 3 tweets that he tweeted at different days where he said that Ashmit, Khali and Samir will be evicted out of the Big Boss house but poor stupid Boy his all predictions had gone wrong and three of these guys are still in Big Boss.

Now you must be convinced that this guy is really a stupid. What ? you still didn't get it ? you want more ?
So here is one more proof to cement my claim.

Should i say more now ? no na ? So pls follow him on twitter or atleast go through his tweets you'll read lots of crap there. So i leave here with one more crap of him in front of you rest you can see on his twitter profile. 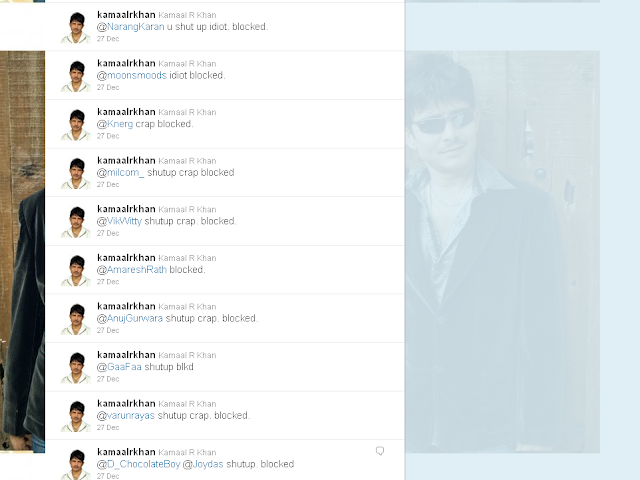 Email ThisBlogThis!Share to TwitterShare to FacebookShare to Pinterest
Labels: Fun