A Jodi Could it be ? 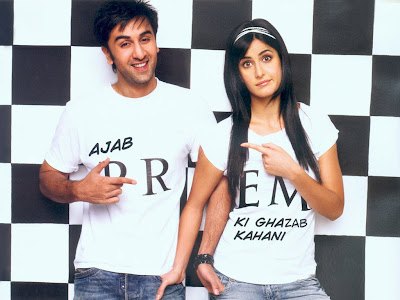 Ranbir and Katrina are both heartthrobs of millions,but if they are heartthrobs of themselves nobody knows.
What couple would they made if they are together ! But as Katrina is linked with Salman(which she never affirms) and Ranbir was dating Deepika previously(rumors still pop up that they are back) the possibilty of them being together is very low.
Katrina is in her 20s and our Sallu Bhai in his 40s that means when Katrina was born Salman was about the age of me(I am imagining how would it feel to be in love with a girl who is just born) doesn't qualify them to be a perfect pair. More so Salman does not looks to have luck going with his girlfriends(Sangeeta Bijlani,Aishwarya,theres some more girls in the list not getting there names) so chances of going them forward again very low.
Now comes Ranbir looks like single at the moment and could be ready to mingle. Deepika chapter was there and they were madly in love with each other but no body knows what hapenned, but as they say whatever happens it happens for good(If you take my opinion Deepika and Ranbir was no jody, there has to be someone special for Ranbir)
Now as Ranbir and Katrina must have spend much time at the sets of Ajab Prem Ki Ghazab Kahani and now on Rajneeti there must be some Kuch Kuch Hota Hai in between them(i mean how is it possible if two beautiful people are so close to eachother((i mean on shooting)) and doesn't have any feeling  for eachother).

Well its seems they could have some kind of future, and if that happens they would made Bollywoods best Jodi(I don't know why i want them to be with eachother) ! Tweet